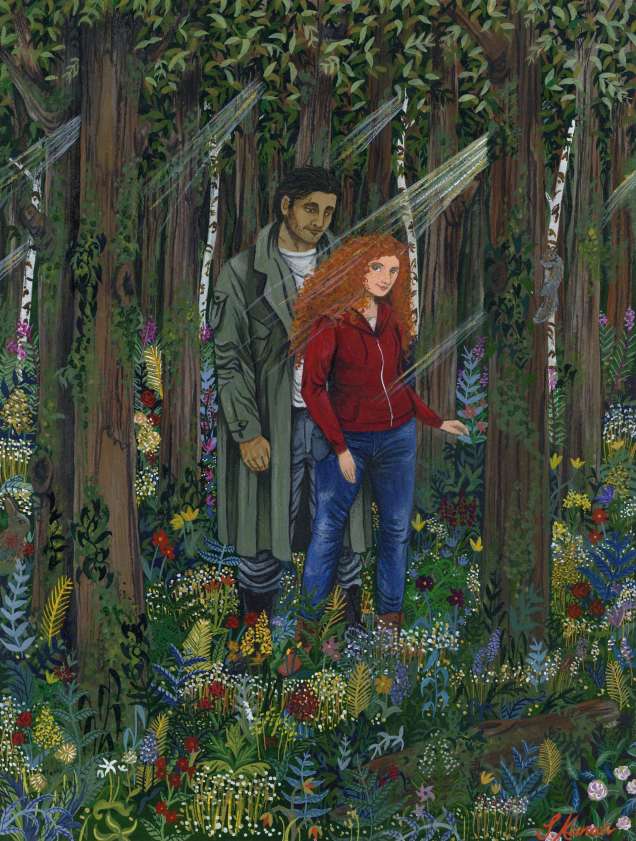 The series is set far into the future and cleverly blends fairy tales with sci-fi in a futuristic setting. As I explained in my Cinder post, my aim with this series of paintings is to illustrate not only a scene from the novel but also elements from the original story that the novel is based on.

So with my Scarlet painting, I’ve chosen a scene from the book where Scarlet, based on Red Riding Hood herself, and Ze’ev (also known as Wolf and based on the Big Bad Wolf) are walking through a forest because it’s a scene which instantly reminded me of the Little Red Riding Hood story, specifically when she meets the big bad wolf and tells him where she’s going before leaving the path to pick flowers.

Ironically despite these novels featuring sci-fi elements, my first two paintings have hardly any sci-fi or futuristic elements, but I promise the next two will feature them more prominently. The Scarlet painting doesn’t actually have any sci-fi elements included at all. Originally I was going to include a train in the far background of the painting but just couldn’t fit it in.

Once again I was really inspired by medieval imagery, specially tapestries, and classical storybook images to create this painting. I also have never painted as many plants as this in one painting before but I really wanted to go overboard with this one in order to create the effect of a wild forest. This also helped emphasise the Little Red Riding Hood scene where she picks wildflowers in the forest while the wolf rushes to her grandmother’s house.

I have drawn up the next two images in this series and there are just waiting to be painted. Hopefully they won’t take me too long.